Hey everyone! So lately, I’ve been having quite a bit of fun doing some various projects that I thought I would share with you, including a wall collage, glittered candle jars, and a chalkboard picture frame.

I just wanted to apologize ahead of time that I do not have before and after pictures or step by step pictures. But, I personally think these are easy and simple projects that don’t require much skill. So let’s get started!!

The first project that I was working on was a magazine collage for my wall. I started this over Christmas break but I’m just now getting around to taking pictures and posting these crafts :)

It was a fairly simple craft to do. I simply just ripped magazine pages I liked and tacked them to the wall with some Scotch wall mounting adhesive. There is no need to cut off the rough edges on the magazine clippings; when you overlap the pages, the edges are no longer visible, so there is no need to cut them off.

This project was rather time consuming as it took around 45 minutes to do each row and I needed 9 rows to fill the wall. But after watching some shows on Hulu and jamming out to some music, I finally finished it, doing around 2 rows each day.

The next craft involves something I like very very much: glitter.

This was yet another simple craft to do and a great way to recycle old glass jars! This process is a little bit harder to explain, but I removed the wax from the candle jars, and used Modge Podge to glitter the sides.

To see how I did this process, watch this video :) One thing I do what to mention though is that I recommend putting another layer of Modge Podge on after it has dried. This seals in the glitter so it doesn’t get everywhere! The person in the video uses it as a brush holder, but you can certainly use it for anything! I personally have all kind of things in them, such as lip balm, extra money, hair ties, etc.

The last project is another fun one and is almost similar to a post I did last year, but this one is chalkboard instead.

To complete this project, you will need chalkboard paint and a frame that has glass you can remove. To start, paint the glass with chalkboard paint of any color; I used one from Martha Stewart that works on many surfaces. You may need 2-3 coats to make sure you have an opaque finish. I honestly just followed the directions on the bottle and it turned great!

I will hopefully be doing a more in-depth post on glittering things as well as some other projects involving glitter, so be looking out for that!

Have a great day,
Sabrina 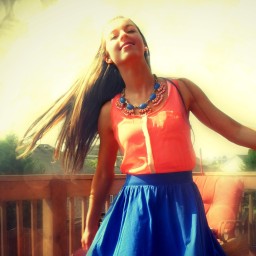 Hello! I'm Sabrina and welcome to my blog filled with all kinds of snippets of my life :) Thanks for stopping by!